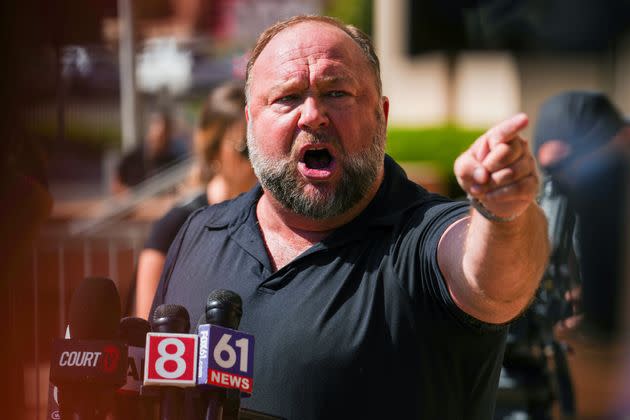 Infowars founder Alex Jones speaks outside Waterbury Superior Court amid a trial against him on Sept. 21, 2022, in Waterbury, Connecticut. (Photo: Joe Buglewicz via Getty Images)

In this country, there are only so many ways to deal with a man like Alex Jones.

On Wednesday, a jury in Connecticut tried its best to force the Infowars host and owner to face consequences for the hurt that his lies have caused others, ordering Jones to pay $965 million to relatives of victims of a 2012 mass shooting and an FBI agent he accused of all being actors.

In an interview with “PBS NewsHour,” trial lawyer Jesse Gessin described the nearly $1 billion judgment as “probably one of the largest defamation verdicts in US history.”

The biggest sum, $120 million, went to Robbie Parker, whose 6-year-old daughter, Emilie, was killed in the attack on Newtown’s Sandy Hook Elementary School. Outside the courtroom, Parker said he was proud that “what we were able to accomplish was just to simply tell the truth.”

Indeed, this all started back in 2013 when Jones described grieving parents of the victims as “crisis actors” and called the shooting “the fakest thing since the $3 bill.”

“They’re clearly using this to go after our guns,” Jones alleged at the time.

This case has taken too many years to reach an end.

And it’s just one of three defamation suits filed against Jones by relatives of the victims, who have said they hope to prevent other families from enduring similar abuse.

In August, a jury in a separate case in Texas said Jones must pay $45.2 million in punitive damages and $4.1 million in compensatory damages to the parents of Jesse Lewis, a 6-year-old killed at Sandy Hook. However, because that state imposes a strict limit on punitive damages, Jones is unlikely to have to provide the full amount. Another suit filed in Texas by parents of another shooting victim is expected to begin later this year.

As of now, Jones looked totally unbothered by the judgment — undoubtedly threatening the peace that these families are seeking.

While testing in August, Jones acknowledged that he had been wrong about Sandy Hook and conceded that the shooting was real.

However, this week he laughed and mockedthe damages awarded to the plaintiffs, calling the trial “all made up.”

“They covered up what really happened, and now I’m the devil,” he said scornfully. “I’m actually proud to be under this level of attack.”

Jones did not attend the latest court hearing but did broadcast live as the verdict was read — branding it’s a “joke.” He described the proceedings as resembling a “kangaroo court” as he went on to insult the judge.

To be sorry is to be repentant, not repugnant.

As if Jones has not done enough harm, he has made the choice to continue fundraising off the pain of the families of deceased schoolchildren and educators, and he has denied that they will see payment.

“Ain’t going to be happening. Ain’t no money,” the fabulist said on his show.

“This must be what hell is like,” he added. “They just read out the damages, even though you don’t got the money.”

In comparison, Erica Lafferty, the daughter of a slain Sandy Hook principal, said that people mailed her rape threats as a result of Jones’ promotion of conspiracy theories.

“I wish that after today, I can just be a daughter grieving my mother and stop worrying about the conspiracy theorists,” she said. She is not hopeful, however. Lafferty said that Jones’ “hate, lies and conspiracy theories will follow both me and my family through the rest of our days.”

Jones has given her reason to worry, as he’s urgent his audience to donate money and buy products from his store to “fight this fraud” and “save Infowars.”

And he has a plan in mind: “For hundreds of thousands of dollars, I can keep them in court for years. I can appeal this stuff.”

For the record, the man is not broke.

Free Speech Systems, the parent company of Infowars, has filed for bankruptcy. But during the Texas defamation trial in August, a financial expert tested that Jones and his company were worth somewhere between $135 million and $270 million.

Jones has reportedly made $50 million annually in revenue — with profits increasing during his trials. That’s in spite of YouTube, Facebook, Apple, Spotify and Twitter each removing him from their platforms in 2018 over his promotion of conspiracy theories. In fact, Jones reportedly got richer after his deplatforming.

Perhaps his online tirade is an act, but he is behaving as if he is untouchable all the same.

This man can’t be allowed to evade the misery that his insufferable online presence has wrought.

“We will be active down in Texas in an action we brought to track fraudulent transfers of assets he’s made, and in bankruptcy court where we are now very significant creditors of Alex Jones and Free Speech Systems,” said Christopher Mattei, a lawyer for Sandy hook families, outside of court Wednesday.

Separately, Joshua Koskoff, another lawyer representing the families, declared Thursday on MSNBC that they would “chase Alex Jones to the ends of the Earth” to make him “pay every last dollar.”

I wish them the best of luck in their pursuit of what is owed to the families.

I usually don’t wish poverty on others given my own public testimonialsabout money wow. But in the case of Alex Jones, he needs to die in destitution — and before that day comes, see absolute financial misery. That does not mean he should go without basic necessities that all humans deserve individually, but the days of him flying to court on a private jet should be over.

Whenever his fans go to his platform of bullshit and buy his toothpaste, diet pills or supplements like InstaHard, the bulk of that money should go to the families. Everything should go to the families. It’s obvious that in the absence of regulation to rein in people like Alex Jones who traffic in disinformation for profit, we are stuck with them.

But they should pay for the pain they cause other people as a result of their lies — until they’re bled dry.

This article originally appeared on HuffPost and has been updated.