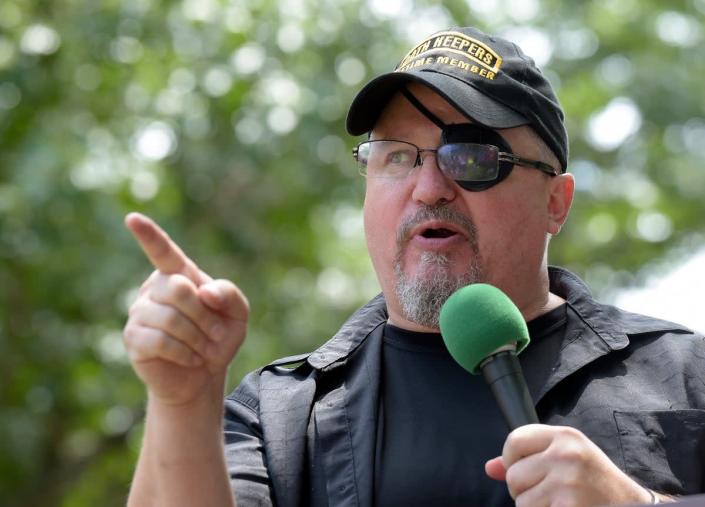 A second day of witness testimony is underway in the trial of Oath Keepers leader Stewart Rhodes and four others tied to the far-right anti-government militia group, who face charges of seditious conspiracy for their roles in the attack on the US Capitol on 6 January, 2021.

Federal prosecutors argue the group and its leader spent weeks plotting an attempt to violently disrupt the joint session of Congress, alongside a mob of Donald Trump’s supporters, to block the certification of Joe Biden’s presidency.

Opening arguments began on 3 October, during which prosecutors argued that the group planned an “armed rebellion” to “stop by whatever means necessary the lawful transfer of presidential power”.

FBI testimony also revealed group messages from Mr Rhodes preparing to reject the outcome of the 2020 election hours after polls had closed, and urging members to “refuse to accept Biden as the legitimate winner.”

Defense attorneys argued that allegations of a cache of weapons and supplies outside Washington were “reactive and defensive only” and only to be used “if Trump called them in.”

Republican Senator Ron Johnson of Wisconsin told a group in Milwaukee that calling the attack on the US Capitol an “armed insurrection” is “inaccurate.”

He added that rioters showed “us how you can use a flag pole”.

Federal prosecutors at the Oath Keepers trial also argue that the group stashed weapons and other supplies with plans for a “quick reaction force”. Texts and group meetings reveal plans for bringing weapons into the capital.

The Justice Department also notes that roughly 84 people have been charged with entering the building with a dangerous or deadly weapon.

The Oath Keepers on trial for a seditious conspiracy for their role in the January 6 attack on the Capitol is a fraction of the group, which has a membership that extends across the US and an influential reach within many sectors of public life and services.

A recently leaked membership list includes the names of hundreds of law enforcement officials, members of the military and elected officials, among others.

Stewart Rhodes brought unfounded claims of fraud in the 2020 presidential election to a meeting with Oath Keepers days after Biden was declared the victor, according to recordings of a meeting days after Election Day that was shared with the jury on Tuesday.

He called voter fraud an “insurrection that needed to be suppressed.”

He also told the group “don’t make it easy for them to pop you with a conspiracy charge.”

What is a sad conspiracy?

Federal prosecutors have filed criminal charges against hundreds of people tied to the Capitol attack, but the indictment of Stewart Rhodes and fouth others stands out because it charges them under a rarely used provision of law that can be found in the chapter of the US criminal code titled “Treason, Sedition, and Subversive Activities”.

What is a sad conspiracy and why is it a big deal?

FBI testimony on Monday revealed messages sent by Stewart Rhodes to members of the Oath Keepers in the hours after Election Day in 2020, leading up to the group’s plans to assemble at the US Capitol on January 6, 2021.

Hours after Election Day, Mr Rhodes allegedly called on his allies to resist a potential Joe Biden victory – which would not be declared until several days later.

“The left, including the Democratic Party … seek our destruction,” he allegedly wrote in a message on the encrypted chat app Signal after 1am on November 4, just hours after polls had closed.

“We must defeat them,” the message continued. “Even if one of them occupies the White House.”

Two days before Mr Biden’s victory, he wrote: “We must refuse to accept Biden as the legitimate winner … Call out the fraud and theft. Protect and defend all who are publicly standing against it.”

When Mr Biden was declared the victor, he wrote to a chat group that included Trump ally Roger Stone: “We need to roll. I’m on my way to DC right now with my [Oath Keeper] tactical leaders … to do recon.”

We’re following a second day of witness testimony in the trial of Oath Keepers leader Stewart Rhodes and four others tied to the anti-government militia group.

“They did not go to the Capitol to defend or help,” according to assistant US Attorney Jeff Nestler. “They went to attack.”