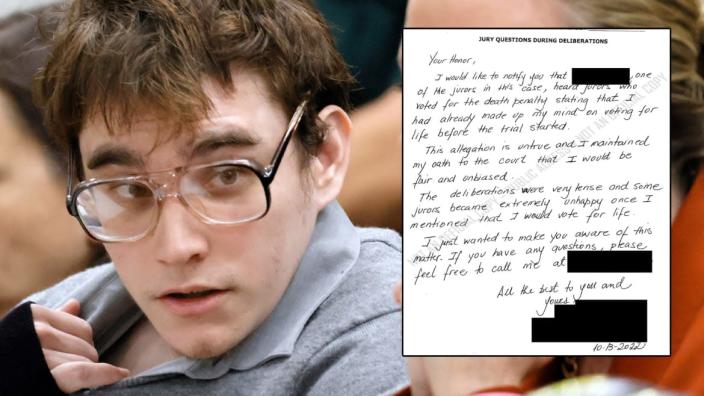 Prosecutors filed a motion Thursday evening to interview a juror in Parkland school shooter Nikolas Cruz’s death-penalty trial after someone on the panel called the state attorney’s office in the wake of the shock verdict to claim they had been threatened by another juror.

The jury left victims’ parents shocked and angry on Thursday when they decided to spare Cruz’s life, instead sending him to life in prison without parole for killing 17 people at Marjory Stoneman Douglas High School in 2018.

But a juror, referred to in a new court filing only as “Juror X,” put in the call just after they were dismissed on Thursday, and requested to speak with Assistant State Attorney Michael Satz, the trial’s lead prosecutor.

The motion says a juror told a support staff member that “she received what she perceived to be a threat from a fellow juror while in the jury room” during deliberations. The motion says the state attorney’s office did not return the juror’s call, but instead filed a notice to the court.

No other details about the threat were included in the motion; a hearing for the motion is scheduled for 1:30 pm Friday.

Separately, a letter penned to Judge Elizabeth Scherer was added to the public record late Thursday, providing further insight into the “tense” deliberations.

“This allegation is untrue and I maintained my oath to the court that I would be fair and unbiased,” the letter says. “The deliberations were very tense and some jurors became extremely unhappy once I mentioned that I would vote for life.”

Two jurors were named in the letter—its author and a separate juror who she says overhead other jurors accusing her of bias—but The Daily Beast is not naming either without their permission.

Some of the letter’s details corroborate what the jury foreman, Benjamin Thomas, told CBS Miami after Thursday’s trial. He said that there was just one staunch holdout who said she’d never vote to execute Cruz because she believed him to be mentally ill, and that two others ended up joining the woman in voting “no” to execution on Thursday.

It is unclear whether the jurors involved in the prosecutors’ motion are the same jurors who were named in the letter.

Read more at The Daily Beast.

Get the Daily Beast’s biggest scoops and scandals delivered right to your inbox. Sign up now.